On average we spend about a year of our lives getting to and from the office. 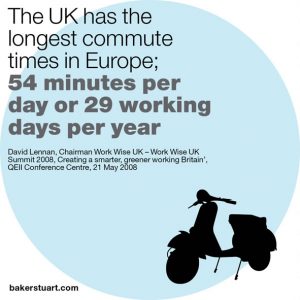 In the UK, the average time spent commuting a day in 54 minutes, compared with 40 minutes worldwide. Workers in London endure the longest average commute at 74 minutes.

Commuting adds hours onto the working day and, more often than not, makes workers tired and irritable. How much more productive would your workers be without this long commute each day?

The shortest commute is among Britain’s 5.4% of employees who work from home and merely have to stumble out of bed each morning to reach their desk. Introducing agile working and giving your workers the option to work from home can have a huge boost on productivity and well-being of your workers, whilst simultaneously reducing office costs due to the reduction in staff members in the office. Home working is, however, not without its own pitfalls with implications on communication, team cohesion, and employers statutory obligations to home workers.